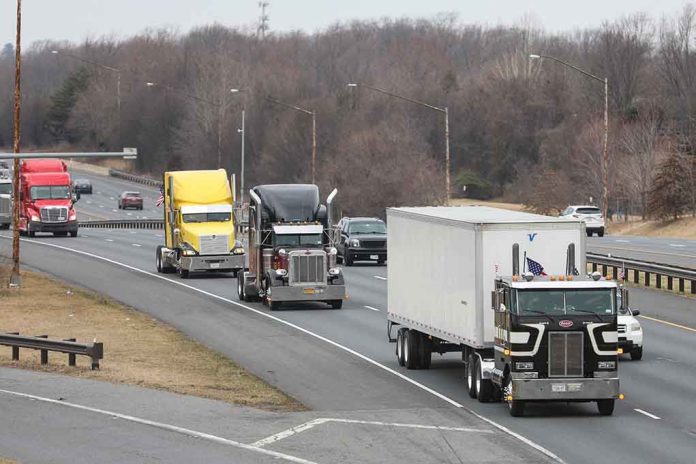 TRAGEDY For Truckers – An Inflation Nightmare!

(RepublicanPress.org) – Rising gas prices across the nation and the world are no news to anyone, and it’s beginning to dig into people’s livelihood, hindering their ability to make money. According to AAA, the price of diesel gas used to fill the tanks of truckers across the US hit an average of about $5.51 per gallon on May 6, and some in the industry claim they can no longer “afford to drive.” In fact, that price represents a more than $2.00 increase from May 2021.

According to Fox News, a trucker from Tennessee said it cost $999 to fill her tank with the 169 gallons it requires. She said diesel prices are the highest she’s ever seen in the 20 years she’s been on the road. Another trucker whose been driving for the past 15 years told the network it’s hard to make a profit with those prices, and it’s difficult to bring money home to his family.

A trucker from DC acknowledged there are pressing matters in the world like inflation and the war in Ukraine that need the country’s attention, but lower gas prices would “be a blessing.” At least one driver stated they think President Joe Biden needs to leave the White House for inflation to finally descend instead of continuing to skyrocket.

Fuel Outlook believes regular gas prices may start decreasing in later 2022, but diesel prices are not expected to decrease significantly this year. So when can truckers and other Americans expect some long-awaited relief?