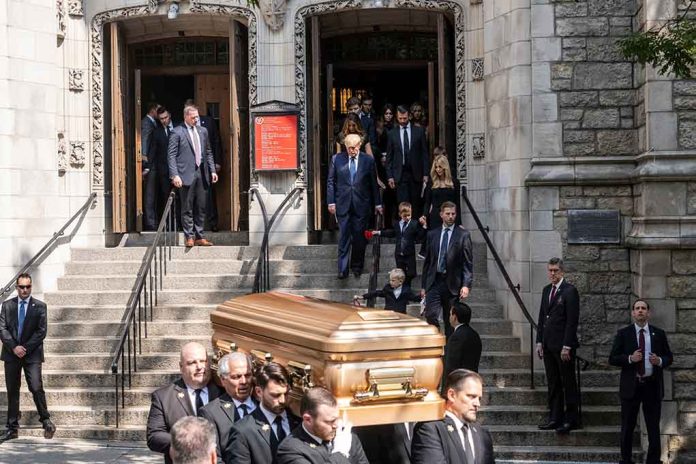 (RepublicanPress.org) – On July 14, Ivana Trump fell down the stairs to her death in her Manhattan home. Several days later, she was laid to rest after mass at St. Vincent Ferrer Roman Catholic Church in New York City, with her children, Ivanka Trump, Donald Trump Jr., and Eric Trump, at her side. Former President Donald Trump, his wife Melania, and their child Barron were also in attendance.

Ivana's three children are attending along with former President Trump.

Born in Czechoslovakia, Ivana Zelníčková was a model and ski racer before she met the former US leader in the 70s, and the two got married. The mother of three then went on to hold prestigious positions in the business mogul’s various organizations while raising her children. When the couple divorced in the early 1990s, Ivana Trump requested $15 million in the settlement.

After the split, the entrepreneur went on to design beauty products, jewelry, and a clothing line. Ivana Trump also wrote an advice column for a time and authored a few books ranging from an autobiography to works of fiction. She also appeared on a few TV shows and had a cameo in “The First Wives Club.”

The former president and their children spoke out after Ivana’s death, praising her for being a wonderful mother and living a life of inspiration. Instead of flowers, her family asked for donations to Big Dog Ranch Rescue in her honor.