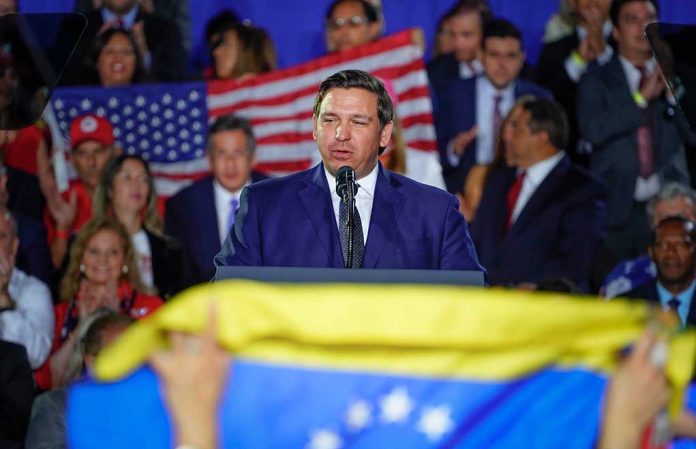 (RepublicanPress.org) – As of December 14, only one person has officially put their hat in the ring for the position of leader of the free world: former President Donald Trump. But, securing the nomination isn’t a lock for the previous US leader as support is split in the GOP.

On December 13, USA Today reported on a recent poll showing many voters might have someone else in mind for the Republican ticket in 2024. According to a USA TODAY/Suffolk University Poll, 69.1% of those surveyed don’t want Trump to run for the Oval Office, but showed 64.71% want Florida Governor Ron DeSantis (R) to try and win the nomination.

Another question in the poll put the two men head to head, asking which Republican candidate the pollsters would prefer. Over 55% chose the governor, and only about 32% chose the former president. The survey even showed DeSantis beating out President Joe Biden in a matchup for president. The current president earned 42.7% of the vote, while the leader of The Sunshine State garnered 46.6%.

This isn’t the only recent poll to show DeSantis taking the lead against Trump. For instance, The Wall Street Journal set up a hypothetical race between the two, and 52% of participants chose DeSantis compared to just 38% who chose Trump. In response to the recent surveys, Trump spoke out on his Truth Social platform, claiming polls involving him from outlets like WSJ and Fox News are “seriously WRONG.”

Why do you think the polls are swinging away from the former president and more toward the Florida governor?