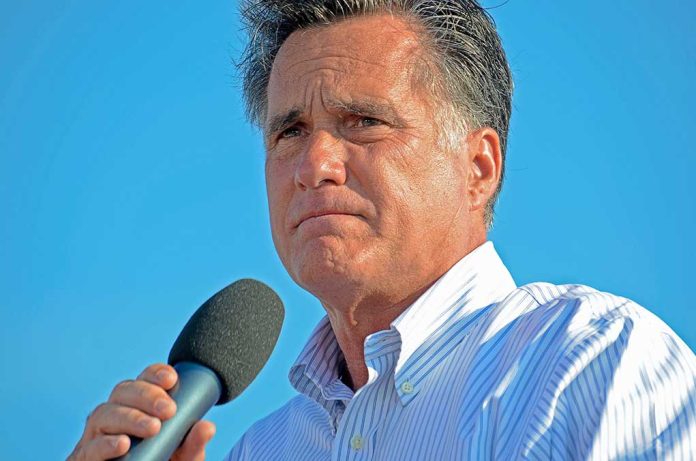 (RepublicanPress.org) – The political term RINO (Republican in name only) reappeared in modern times in late 1992, shortly after Bill Clinton defeated George H.W. Bush. More recently, some conservatives pinned the term on Sen. Mitt Romney (R-UT) after he voted to convict former President Donald Trump at both of his Senate trials. However, it seems he doesn’t have any doubts regarding the 45th president’s power over the Republican Party.

On Thursday, May 5, Romney spoke to POLITICO after several Trump-endorsed candidates won their respective primaries in Ohio the night before. The senator told journalists he couldn’t imagine anything “that would derail [Trump’s] support” by the party’s base. The senator also admitted he felt Trump was “very likely” to become the Republican nominee in 2024 if he decided to seek a second term in the White House.

Trump’s still has major sway still in the GOP — look no further than how his endorsement helped revive Vance’s campaign in Ohio… or this Romney quote:

“It’s hard to imagine anything that would derail his support.“

Political observers and pundits considered the Ohio primaries a bellwether for the former president’s continued dominance in the Republican Party, and Ohio voters responded with a resounding “yes.” Trump-backed J.D. Vance handily defeated his rival to win the state’s GOP Senate nomination, as did House candidates Madison Gesiotto Gilbert and Max Miller.

Likewise, Trump supporter J.R. Majewski defeated his Republican rivals to secure his primary victory for Ohio’s 9th District. Majewski first gained public attention after turning his lawn into a campaign sign for Trump during the 2020 presidential campaign. The former president didn’t endorse a candidate in the race but did give the conservative candidate a shout-out while campaigning for Vance in April.